Prions cause neurodegenerative disease by aggregating extracellularly within the central nervous system which disrupt the normal tissue structure. This disruption is characterized by "holes" in the tissue with resultant spongy architecture. Two conformational isoforms exist, the normal cellular isoform (PrPC) and the infectious, scrapie isoform (PrPSC). Other histological changes include astrogliosis and the absence of an inflammatory reaction. Neurodegenerative symptoms can include convulsions, dementia, ataxia (balance and coordination dysfunction), and behavioral or personality changes.

All known prion diseases are collectively called transmissible spongiform encephalopathies (TSEs). Prion (PrP) is highly conserved through mammals and comparison between primates ranges from 92.9-99.6% similarity in amino acid sequence. The human protein structure consists of a globular domain with three Î±-helices and a two-strand antiparallel Î²-sheet, an NH2-terminal tail, and a short COOH-terminal tail. A glycosylphosphatidylinositol (GPI) membrane anchor at the COOH-terminal tethers PrP to cell membranes. This anchor is integral to the transmission of conformational change; secreted PrP lacking the anchor component is unaffected by the infectious isoform. PrPSC accumulates in compact, protease-resistant aggregates within neural tissue and has a different secondary and tertiary structure from PrPC, but an identical primary sequence.

The primary sequence of PrP is 253 amino acids long before posttranslational modification. Signal sequences in the amino- and carboxy- terminal ends are removed posttranslationally, resulting in a mature length of 208. For human and Syrian hamster PrP, two glycosylated sites exist on helices 2 and 3 at Asn181 and Asn197. Murine PrP has glycosylation sites as Asn180 and Asn196. A disulfide bond exists between Cys179 of the second helix and Cys214 of the third helix (human PrPC numbering).

The precise function of PrP is not yet known, but it is possibly involved in the transport of ionic copper to cells from the surrounding environment. Researchers have also proposed roles for PrP in cell signaling or in the formation of synapses.

Spatial learning, a predominantly hippocampal-function, is decreased in PrP null mice and can be recovered with the reinstatement of PrP in neurons; indicating that loss of PrP function is the cause. PrP is present in both pre- and post-synaptic neuron cells, and the greatest concentration is in the pre-synaptic cells. Some research indicates PrP involvement in neuronal development, differentiation, and neurite outgrowth. The PrP-activated signal transduction pathway is associated with axon and dendritic outgrowth with a series of kinases.

Though most attention is focused on PrPâs presence in the nervous system, it is also abundant in immune system tissue. PrP immune cells include haematopoietic stem cells, mature lymphoid and myeloid compartments, and certain lymphocytes; also, it has been detected in natural killer cells, platelets, and monocytes. T cell activation is accompanied by a strong up-regulation of PrP, though it is not requisite. The lack of immuno-response to transmissible spongiform encephalopathies (TSE), neurodegenerative diseases caused by prions, could stem from the tolerance for PrPSc.

Reactivity
Human
Antibody Type
Monoclonal
Host Species
Mouse
Formulation
Phosphate-buffered solution.
Preparation
The antibody was purified by affinity chromatography.
Concentration
2 mg/ml
Storage & Handling
Do not store antibody diluted below 50 Âµg/mL in the absence of protein (i.e. add 2% bovine serum albumin). The antibody solution should be stored undiluted between 2Â°C and 8Â°C. Please note the storage condition for this antibody has been changed from -20Â°C to between 2Â°C and 8Â°C. You can also check your vial or your CoA to find the most accurate storage condition for this antibody.
Application

Each lot of this antibody is quality control tested by immunofluorescent staining with flow cytometric analysis. For flow cytometric staining, the suggested use of this reagent is â¤0.25 Âµg per million cells in 100 Âµl volume. It is recommended that the reagent be titrated for optimal performance for each application.

3F4 is reactive to amino acid residues 109-112 of prion protein (PrP) from humans, hamsters, and felines. It recognizes both protease sensitive and protease resistant forms of PrP (after denaturing).

Gene ID
5621 View all products for this Gene ID
UniProt
View information about CD230 on UniProt.org 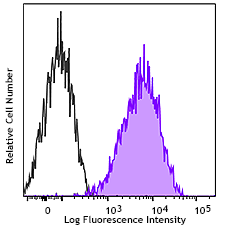 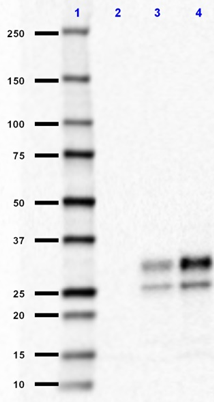 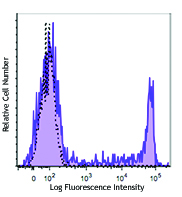