Bone Morphogenetic Proteins (BMPs) are growth factors that belong to the TGF-β superfamily of proteins. They play many important and diverse roles across many body systems including bone and cartilage formation, embryogenesis, and formation and homeostasis of organs. This blog reviews the basic biology of BMPs to help you understand the functions of this protein family.

Explore BMPs and other growth factors

View all of our recombinant proteins

BMP proteins serve a vast and diverse set of functions from embryogenesis to homeostasis of adult organs. They can induce cell lineage commitment, cell differentiation, proliferation, apoptosis, and morphogenesis of limbs and organs [1]. Although originally identified as proteins that induce bone formation and named accordingly, they act throughout the body across almost all systems. Some systems include: skeletal muscle development, adipogenesis, tooth development, iron homeostasis, kidney, eye and heart development, proliferation and differentiation of embryonic stem cells, formation and maintenance of vascular systems, and neurogenesis [2]. Figure 1 below plots specific functions of the indicated BMPs. 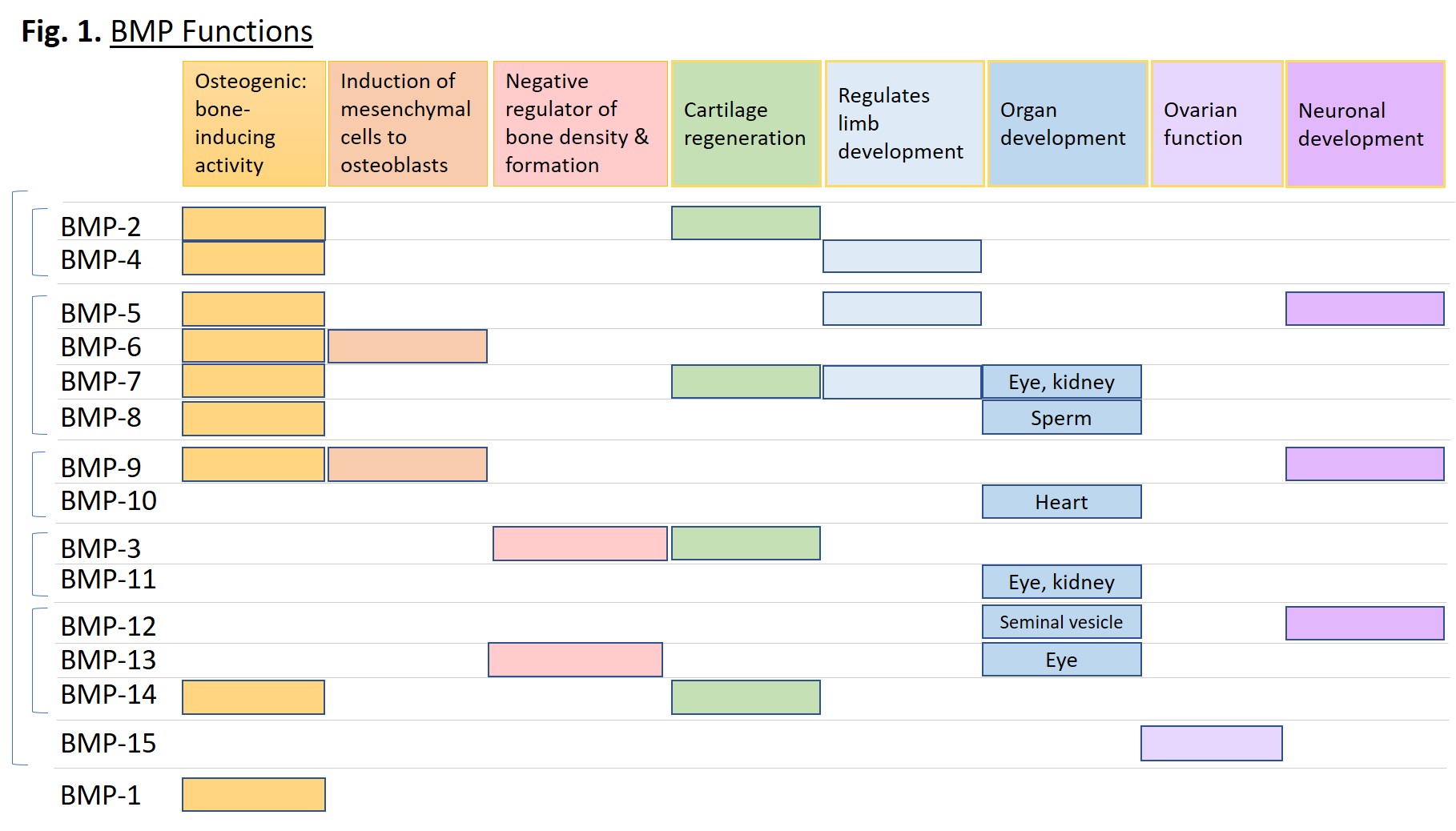 Given the importance of BMPs in development, bone formation, and homeostasis, it is not surprising that mutations in BMP genes or BMP receptor genes can lead to disease. Many skeletal defects such chondrodysplasia, brachydactyly, arthritis, and fibrodysplasia ossificans progressiva (FOP) are associated with BMP mutations, as well as renal fibrosis, telangiectasia, pulmonary hypertension, and many others [2]. More recently, BMPs have been linked to cancers, including colorectal cancer, gastric carcinoma, and oral cancer. A list of diseases associated with each BMP is listed in Table 1.

Studying BMP biology requires research tools that are reliable, consistent, and high quality. BioLegend provides bioassay-validated, high potency biofunctional mouse and human recombinant proteins and antibodies for your research. Every lot is quality tested for performance and is backed by a 100% satisfaction guarantee. Links to relevant products are provided in Table 1 with more to come. Also check out our relevant BMP receptor recombinant proteins quality tested for BMP blocking assays and our recombinant BMP modulators: Noggin, TSG, and Follistatin.

BMPs are small molecules, ranging from 11 to 16 kD, that are proteolytically processed to form disulphide-linked homodimers. They can also be found as heterodimers with enhanced activity, such as BMP-2/7 and BMP-4/7. Each folded monomer contains a cysteine-knot fold, in which six cysteines form intramolecular disulfide bonds [1]. BMPs can be further classified into subgroups based on sequence similarity (Fig. 2A). Of note, BMP-1 is not part of the TGF-β superfamily, but is a metalloproteinase enzyme that cleaves BMP inhibitors. It does not serve as a ligand for cell surface receptors, unlike the other BMPs. 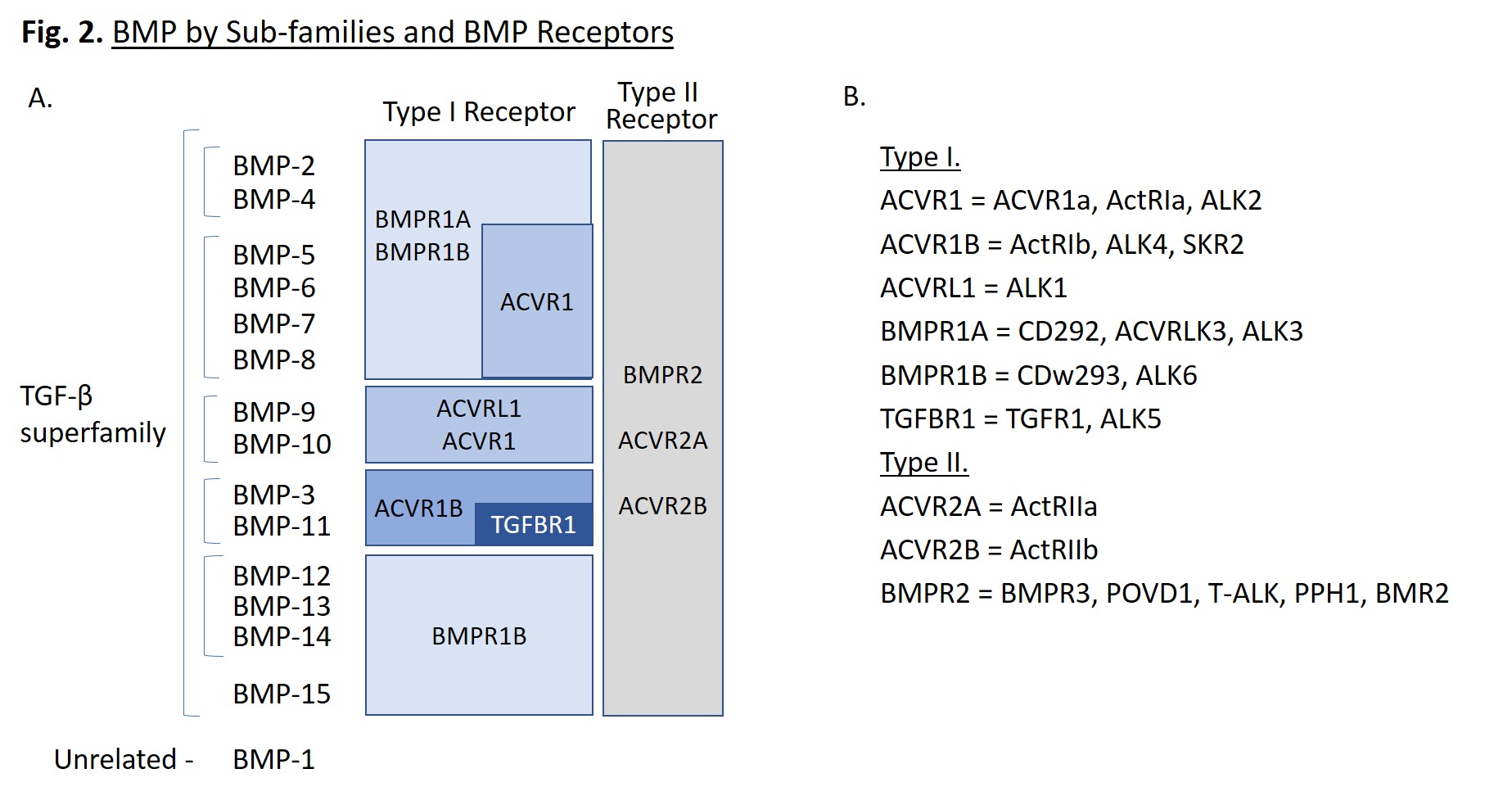 Upon activation, type I receptors go on to phosphorylate receptor-associated SMAD proteins, particularly SMAD1, SMAD5, and SMAD8 (Fig. 3). Once phosphorylated, two R-SMADs bind to one SMAD4, and then the trimeric complex is translocated to the nucleus where it goes on to mediate gene transcription in concert with transcriptional complexes. This is known as the canonical pathway of BMP signaling. There is also a non-canonical pathway in which BMP signaling triggers pathways mediated by p38 MAPK [2].

A diverse set of molecules, both intracellular and extracellular, can modulate BMP signaling [1]. In the extracellular space, antagonist molecules, such as Noggin, Chordin, Crossveinless-2, and Gremlin proteins, bind to BMP dimers and prevent their binding to type I and type II receptors. However, at low concentrations some BMP antagonists such as Crossveinless-2 and Short gastrulation (Sog) can conversely increase signaling by either enhancing BMP cell surface binding via sulfate proteoglycans or by transporting BMPs [3]. Cell surface coreceptors, such as the RGM/DRAGON family bind directly to BMPs and enhance cell signaling pathways [4]. Alternatively, BAMBI, which lacks a serine/threonine kinase domain, serves as a pseudoreceptor that inhibits signaling by interacting with type I receptors, thus impeding signaling to SMADs. In the cytoplasm, SMAD6 and SMAD7 serve as inhibitory proteins that block pathway signaling. E3 ubiquitin ligases, Smurf1 and Smurf2 also block signaling by tagging BMP receptors and SMAD proteins for proteosomal degradation [5]. Interestingly, microRNAs (miRNAs) can serve as both promoters or regulators of BMP signaling [6, 7]. Lastly, within the nucleus there are also a number of proteins that either promote or inhibit SMAD-specific gene transcription. 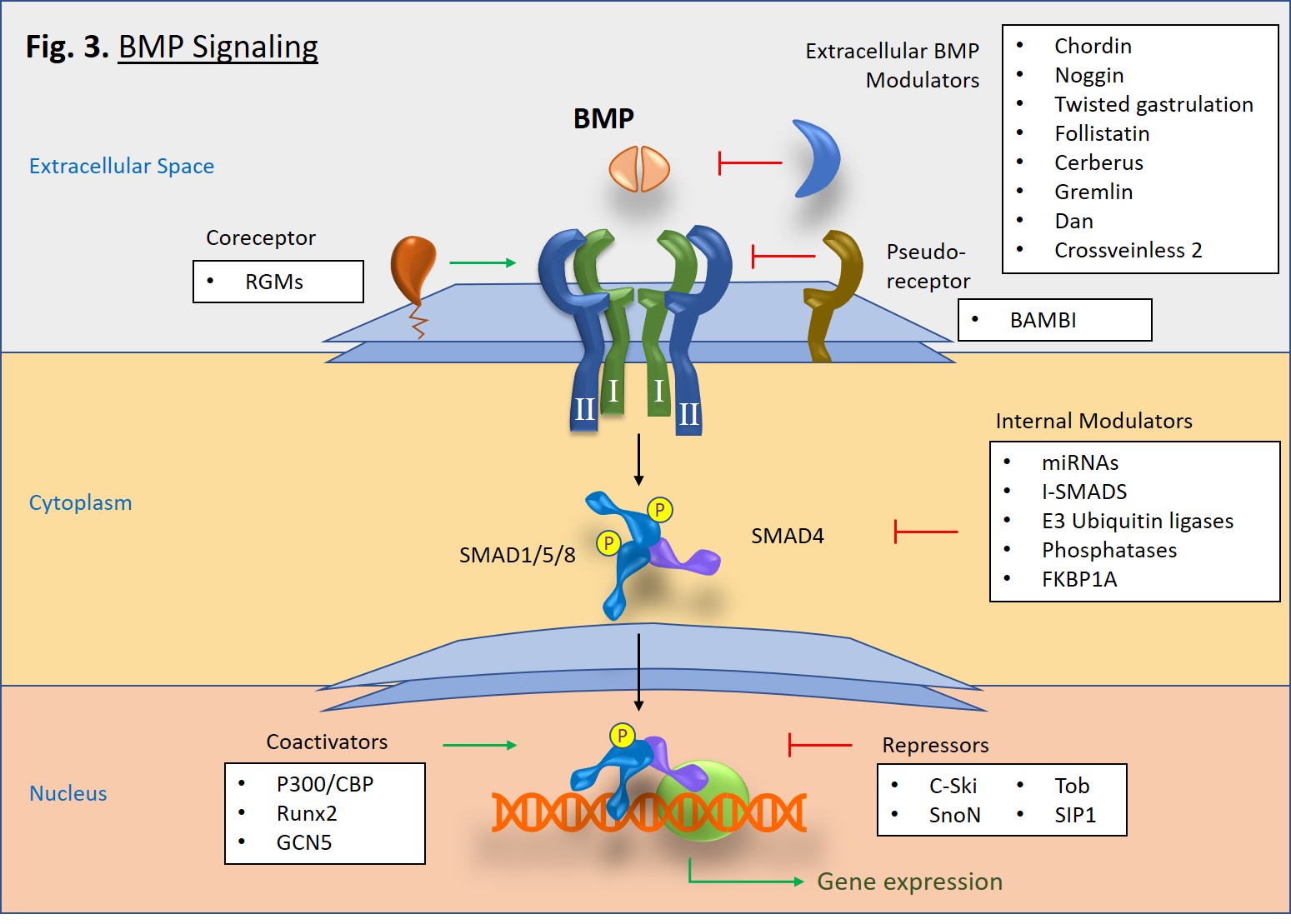 Sign up for our email newsletter to get up to date on our newest content and product offerings.