PROTACs and Alzheimerâs Disease: Promoting Clearance in the Brain

Alzheimer’s disease (AD) is a progressive neurodegenerative disorder that is characterized by impaired cognitive function and causes a decline in memory, thinking and reasoning. The two most common pathological hallmarks of AD are the generation of toxic amyloid beta (Aβ) peptides and their accumulation in amyloid plaques, and hyperphosphorylation of tau protein which leads to the formation of tau tangles. These events compromise neuronal cell health and ultimately lead to cell death.

While tremendous progress has been made in understanding the underlying molecular mechanisms leading to neuronal loss, many factors remain unclear- such as how different cell types contribute to disease pathology and how we might delay disease progression.

In recognition of Alzheimer’s Awareness Month, we are highlighting known pathways dysregulated in AD and a recent advancement in the field, a technique designed to promote clearance of toxic proteins.

Our featured products include antibodies and sampler kits for studying misfolded or aggregate-prone proteins in neurodegeneration. In addition, we provide resources for studying various non-neuronal cell types implicated or affected in AD such as astrocytes, microglia, and oligodendrocytes. For proteogenomics analysis, our TotalSeq oligo-conjugated antibodies allow for simultaneous protein and RNA profiling at a single-cell level. 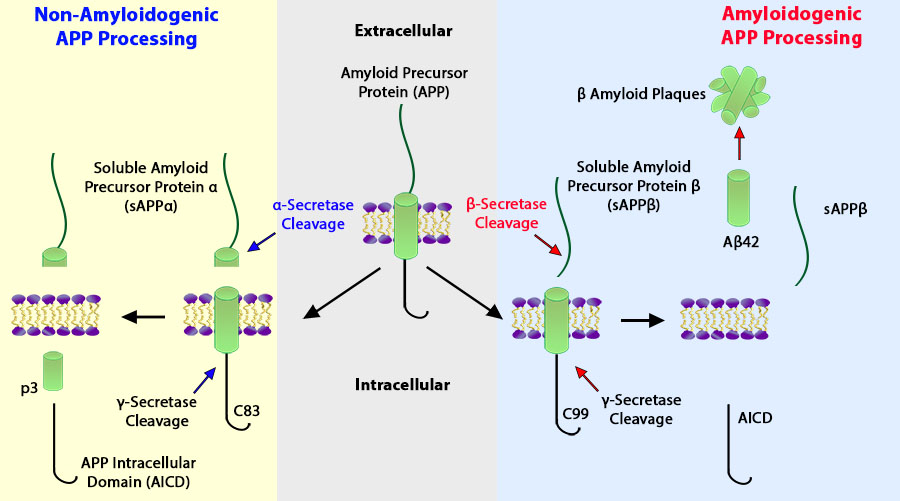 Amyloid Precursor Protein (APP) functions as a cell surface receptor and performs physiological functions on the surface of neurons relevant to neurite growth, neuronal adhesion, and axonogenesis. It is involved in cell mobility and transcription regulation through protein-protein interactions2.

Amyloid plaques, deposits of the β-amyloid (Aβ) peptide, are defining lesions in AD. Aβ is a proteolytic product of APP, and a strong genetic association exists between early-onset familial forms of AD (FAD) and the 42 amino acid species of the Aβ peptide (Aβ42)5. Autosomal dominant mutations in the genes for APP, presenilin1 (PS1), and presenilin2 (PS2) increase production of Aβ42 and cause FAD2,4,5.

Aβ is cleaved from APP by the sequential action of two proteases, the β- and γ-secretases2. Initially, the β-secretase cuts APP at the N terminus of the Aβ domain to produce the membrane-bound fragment C99 and the secreted APP ectodomain sAPPβ. Subsequently, C99 is cleaved by the γ-secretase to generate the C terminus of Aβ. γ-Secretase cleavage is not precise and produces a series of Aβ peptides of 38–43 amino acids in length. Under normal conditions, a higher proportion of Aβ is produced as the 40 amino acid Aβ40, while less Aβ42 is made2,5.

Tau is a neuronal protein that binds to microtubules and stabilizes their formation and maintenance. Hyperphosphorylated tau proteins induce neurofibrillary tangles (NFT) and impair neuronal health. NFTs were found to make up the paired helical filaments in brains of Alzheimer’s disease (AD) patients5.

Considerable research has been performed to understand the detrimental effects of protein aggregates on neuronal health and several methods have been developed to induce protein degradation as potential treatments3,6.

PROTACs are also theorized to eliminate protein targets that are ‘undruggable’ by traditional inhibitors or are non-enzymatic proteins such as transcription factors 6-10. In addition, the PROTAC technique does not require direct inhibition of the functional activity of the target protein, making PROTAC technology an attractive strategy for many aspects of targeting protein degradation7-10,13.

Of particular interest is the work done by Chu et al. where they designed a multifunctional PROTAC peptide, TH006, to induce intracellular tau degradation by increasing its poly-ubiquitination. TH006 also promoted tau reduction in primary neuron cells and a mouse model of AD and prevented cytotoxicity caused by Aβ12. Similar work by Wang et al. supports this conclusion. A different compound was developed and shown to promote tau clearance through the UPS and to improve cognitive functions in an Alzheimer-like models14, strongly suggesting a beneficial effect of protein clearance in disorders of aggregation.

Treatment options for AD or similar disorders are limited, representing a significant burden on patients. Although more clinical studies are essential for determining safety and benefit of PROTAC use in disease, promoting clearance of aggregated proteins could be beneficial in AD and other neurodegenerative disorders.

We are dedicated to providing resources for the advancement of research in AD and other neurodegenerative disorders. Contact us or visit our Neuroscience page to learn more.