Innate immunity is present from birth and represents the body’s first line of defense against potentially harmful pathogens or toxins. It includes anatomical barriers such as the skin and gastrointestinal tract; secretions such as mucus and saliva; and a multitude of non-specific immune responses that serve to eliminate anything deemed to be ‘non-self’. To function effectively, the innate immune system relies on recognition of molecules that are common to many pathogens but which are lacking in the host. Upon detecting these molecules, innate immune mechanisms drive the elimination of foreign substances through inflammation, phagocytosis, and the presentation of antigens to immune cells.

Pathogens and toxins can enter the body via routes that include the skin, respiratory tract, and digestive system. To prevent their uptake, specialized structures such as hair and cilia, as well as various secretory mechanisms (i.e., mucus, saliva, tears), provide a physical barrier between the host and the external environment. In addition, the body harbors a number of chemical barriers like the low pH of stomach acid and digestive enzymes to aid in defense.

The complement system, also known as the complement cascade, comprises a series of around 20 different proteins that circulate freely in the blood and tissue fluids. While the complement proteins are usually inactive, they sequentially activate one another upon encountering a foreign micro-organism to enhance – or complement – other aspects of the innate immune response.

Activation of the complement system occurs via three main pathways: classical, mannose binding lectin (MBL), and alternative. The classical pathway is triggered by antibody-antigen immune complexes binding to the complement protein C1, which circulates as a complex of six C1q molecules and two molecules each of the serine proteases C1r and C1s. Following interaction between the fragment crystallizable (Fc) portion of the antibody and C1q, the resulting conformational change activates C1r and C1s, which in turn cleave the complement proteins C2 and C4 to generate the C3 convertase C4bC2a. This cleaves C3, the central component of the complement cascade, forming the effector molecules C3a and C3b. In turn, C3b can complex with C4bC2a to form the C5 convertase C4bC2aC3b; this cleaves C5 to form C5b, a key component of the membrane attack complex (MAC).

The MBL pathway is similar to the classical pathway in that it also leads to the formation of C4bC2a. However, it is initiated by mannose residues present on the surface of micro-organisms such as bacteria and fungi. Binding of circulating MBL to these residues activates the MBL-associated serine proteases MASP-1, MASP-2 and MASP-3, which cleave C2 and C4 to generate C4bC2a.

A defining feature of the alternative pathway is that it is constitutively active at low levels, ensuring that the complement system is constantly primed for rapid activation. Tightly controlled hydrolysis of a thioester bond within C3 is thought to trigger the alternative pathway, which is often referred to as ‘the amplification loop’ because it generates another C3 convertase (C3bBb) that can activate additional C3 to that activated via the classical and MBL pathways.

Activated complement gives rise to three main types of effector molecules. The first of these are the anaphylatoxins (C3a and C5a), which attract leukocytes to the site of infection and activate them through interaction with the G-protein–coupled receptors (C3aR and C5aR) expressed at the leukocyte surface. Opsonins (C3b, iC3b, and C3d) are a second group of effector molecules, which instead bind to foreign pathogens or infected self-cells, targeting them for phagocytosis. Lastly, the MAC forms pores in the membrane of pathogens or targeted cells, resulting in their destruction by osmolysis. 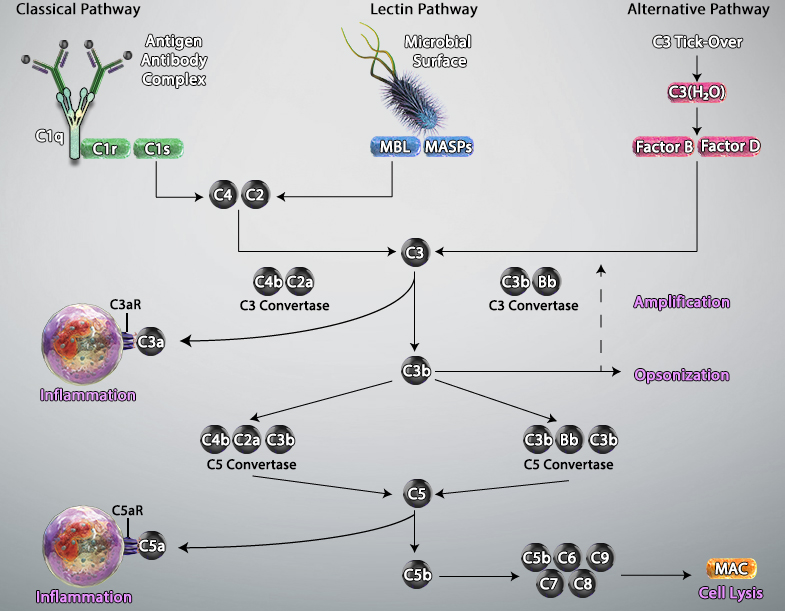 Inflammation is a complex series of biological processes that occurs in response to a potentially harmful stimulus. It can broadly be divided into three phases: initiation, elimination, and resolution. During the initiation phase, tissue-resident sentinel cells such as macrophages and dendritic cells use germ-line encoded pattern recognition receptors (PRRs) to recognize pathogen-associated molecular patterns (PAMPs) and damage-associated molecular patterns (DAMPs) on entities such as invading pathogens or dying cells, to which they respond in a variety of different ways. As just one example, toll-like receptors (TLRs) are PRRs that can be activated by prokaryotic DNA, resulting in the release of cytokines and chemokines that promote immune cell activation and recruitment to eliminate a bacterial infection. It is at the initiation stage that the complement system is activated.

In the elimination phase, C3a activation, histamine release from mast cells, and production of prostaglandin cause changes in the vasculature including vasodilation, increased blood flow, and enhanced vascular permeability. These changes allow immune cells to more easily escape from blood vessels into the affected tissue. Upon reaching the inflammation source, neutrophils and macrophages recognize molecular patterns such as PAMPs and DAMPs on the surface of invading pathogens or damaged cells and perform cell engulfment. Neutrophils additionally use reactive oxygen species (ROS) for targeted cell destruction. Production of cytokines such as TNF-α, IFN-γ, and IL-1β by cells including macrophages and T cells enhances inflammation through recruitment of further immune cells into the affected area.

The resolution phase mainly involves quelling the inflammatory response. Signals such as phosphatidylserine, oxidized low density lipoprotein (oxLDL), and sphingosine-1 phosphate (S1P) expressed by dead and dying cells promote their engulfment by scavenging phagocytes to control further inflammation. Macrophages may switch to an anti-inflammatory phenotype, resulting in the depletion of cytotoxic mediators (e.g., ROS) through arginase-1 activity, and may also produce anti-inflammatory cytokines such as IL-10 and TGF-β. Fibroblasts activated by TNF-α and IL-1β begin tissue remodeling and repair by laying down collagen and extracellular matrix. And antigen-presenting cells (APC), such as dendritic cells, process antigen from the inflammation source and travel to lymph nodes where they present the antigen to naïve T cells and B cells to drive the adaptive immune response.

Although acute inflammation is necessary to rid the body of potentially harmful pathogens, chronic inflammation can be destructive to healthy tissue and can both be caused by, and lead to, various diseases. Examples of conditions involving chronic inflammation include atherosclerosis, type 2 diabetes, cancer, allergy, and autoimmune diseases such as psoriasis, type 1 diabetes, Crohn’s disease, rheumatoid arthritis, lupus, and multiple sclerosis. 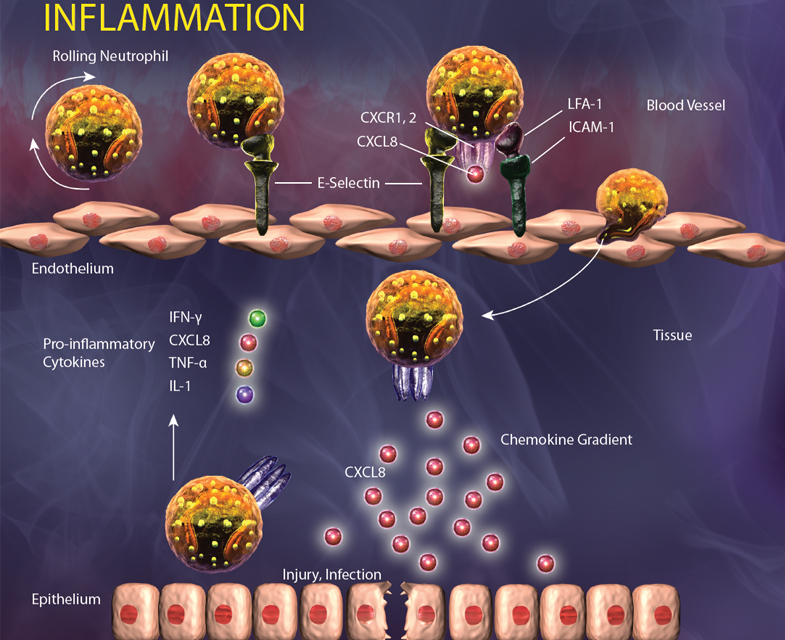 Fc receptors (FcRs) are multi-subunit cell surface proteins expressed by many different types of immune cells. They specifically recognize the Fc portion of antibodies, providing an important link between the events triggered by innate immune effector cells and the specificity of the adaptive immune system. Fc receptors can broadly be categorized as those that trigger cell activation and those having an inhibitory role. While activating Fc receptors are characterized by the presence of highly conserved cytoplasmic immunoreceptor tyrosine-based activation motifs (ITAMs) that are critical to their function, inhibitory Fc receptors instead possess one or more immunoreceptor tyrosine-based inhibitory motifs (ITIMs) that allow negative regulation of the immune response.

By binding to antibodies that are attached to invading pathogens or infected cells, Fc receptors perform a critical role in protecting against infection. Mechanisms through which they exert their anti-microbial effects include activating macrophages to phagocytose IgG-coated bacteria following engagement of the FcR, and stimulating natural killer (NK) cells to release cytotoxic molecules from their granules upon FcγRIIa and FcγRIIb binding to IgG - a process known as antibody-dependent cell-mediated cytotoxicity (ADCC). Fc receptors also function in the allergic response, prompting mast cells to release inflammatory mediators such as histamine and heparin following IgE binding to FcεRI and FcεRII. A further important function of Fc receptors is the internalization of antigen-antibody complexes for subsequent presentation to immune cells and development of adaptive immunity.

This binding of antibodies by Fc receptors can present false positive results in flow cytometry staining. To limit this, we provide Fc blocking solutions for both mouse and human samples. These buffers occupy the Fc receptors of cells so that they do not bind your fluorophore-conjugated antibodies for targets of interest.

All human TLRs are type I transmembrane receptors comprising an extracellular domain involved in PAMP recognition and a cytoplasmic domain that recruits various signaling molecules to activate gene expression. Upon PAMP binding, TLRs recruit adaptor proteins to their cytoplasmic tail (TLR1, TLR2, and TLR4 - 9 use the MYD88 adaptor, while TLR3 and TLR4 use TRIF), which allows them to switch on different signaling pathways. The three main pathways activated by TLRs are the MAP kinase, NF-κB, and IRF pathways, all of which drive the expression of genes required to induce the inflammatory response and drive other forms of anti-microbial defense. 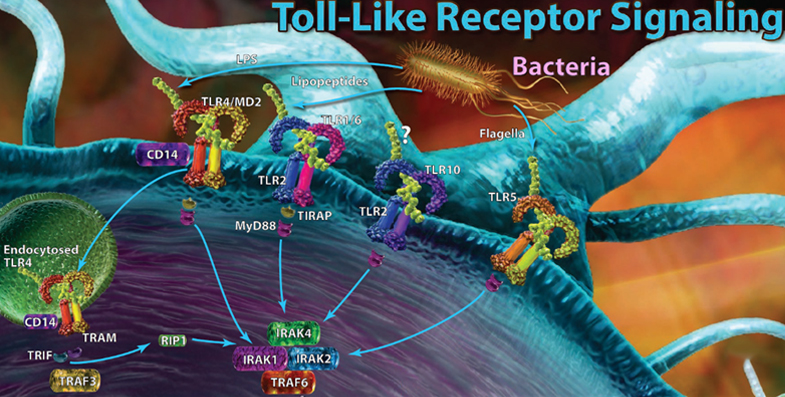