Adaptive immunity, also known as acquired immunity, involves developing an immunological memory to a foreign invader. Unlike the innate immune response, which is primed to respond immediately to any potential threat, the adaptive immune response is slower since T and B cell populations must be established during the initial encounter. However, because a proportion of these populations comprise long-lived memory T and B cells that can rapidly be activated upon any subsequent encounter, adaptive immunity provides a faster and more robust response should this be required in the future.

Antigen presentation is the process by which cells digest proteins into small peptides before displaying them at the cell surface. It is mediated by class I and class II major histocompatibility complex (MHC) molecules that are encoded by the human leukocyte antigen gene complex (HLA). The main differences between class I and class II MHCs relate to the types of cell that express them, the origin of the peptides that they bind, and the nature of the response they induce.

MHC class I molecules are expressed by all types of nucleated cells and bind peptides derived from the digestion of intracellular proteins. These include both endogenous proteins that are broken down during normal cellular turnover and foreign proteins such as those resulting from viral infection of cells. Presentation of MHC class I peptide complexes at the cell surface leads to cellular destruction by CD8+ cytotoxic T cells in cases where the peptide is deemed to be non-self.

MHC class II molecules are expressed only by specialized antigen-presenting cells (APCs) such as macrophages, dendritic cells, and B cells. Unlike MHC class I molecules, they bind peptides resulting from the digestion of extracellular proteins like bacterial cell wall components or fungal toxins. Presentation of MHC class II peptide complexes to CD4+ T helper cells is fundamental in triggering the adaptive immune response.

The exogenous processing pathway mediated by MHC class II molecules begins with protein uptake via endocytosis. Internalized proteins are delivered to early endosomes for sorting, with foreign proteins being transported to late endosomes and then on to lysosomes for degradation. At the same time, MHC class II complexes, formed by α and β chains, are stabilized by an invariant chain and are assembled in the endoplasmic reticulum (ER). From here, they are transported through the Golgi apparatus into MHC class II compartments (MIICs), where protease digestion of the invariant chain generates a class II-associated invariant chain peptide (CLIP). The CLIP is subsequently exchanged for the foreign peptide, then the MHC class II-peptide structure is delivered to the cell membrane. 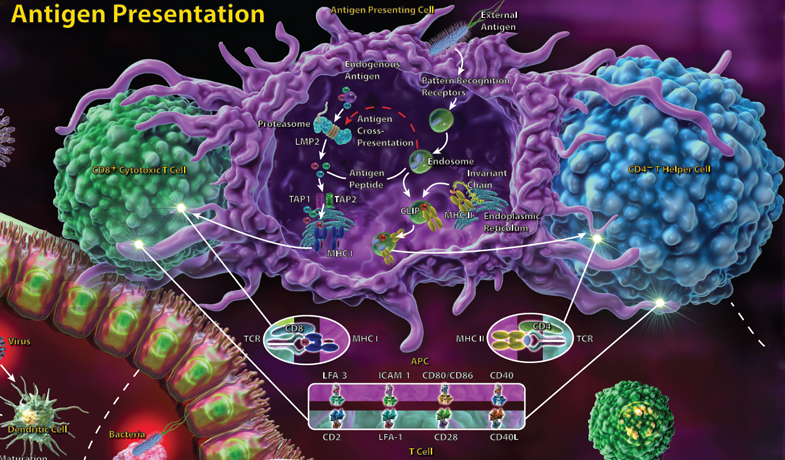 B Cells and T Cells

B cells and T cells are the major cell types involved in adaptive immunity and must be able to recognize and respond to millions of possible antigens in order to function effectively. To achieve this, they create almost infinite diversity at their cell surface receptors, which comprise antibodies in the case of B cells and antibody-like structures known as T cell receptors (TCRs) at the surface of T cells.

Antibody diversity at the B cell surface is driven by three main mechanisms. The first of these is V(D)J recombination, which occurs during early B cell development and involves the splicing of different variable (V), diversity (D), and joining (J) gene segments to form the antibody variable region. Because so many different V, D, and J gene segments are available, and because they are combined in such a random fashion, millions of genetic configurations are possible. Junctional diversification provides further variation at this stage through the removal or addition of nucleotides at the ends of the V-region coding sequences as they are joined by the V(D)J recombinase enzyme complex. Thirdly, when a mature B cell encounters the antigen recognized by the B cell receptor, its recombined genes can undergo a third level of diversification known as somatic hypermutation. Here, an enzyme called activation-induced cytidine deaminase (AID) introduces random point mutations into the antibody variable region genes to further diversify the antibody population. Somatic hypermutation results in the development of higher affinity antibodies as the adaptive immune response progresses, a process referred to as affinity maturation.

When a B cell meets its antigen, it can undergo one of two fates. Differentiation into IgM-secreting plasma cells provides a rapid yet short-lived response to the target, with pentameric IgM antibodies being involved in neutralization and clearance, as well as initiating inflammatory reactions via the complement system. Alternatively, B cells can proliferate and undergo affinity maturation, producing large quantities of IgG antibodies and additionally developing into memory B cells able to respond efficiently should the antigen be encountered again.

Rather than being comprised of an antibody, the T cell receptor (TCR) consists of a disulfide-linked heterodimer of alpha (α) and beta (β) chains that form a complex with CD3 at the T cell surface (although it should be noted a much smaller fraction of T cells have a TCR consisting of a gamma chain and a delta chain). Each of the α and β chains includes a constant region and a variable region, with the organization of the different gene segments being broadly comparable to that of the B cell receptor.