While investigating the role of IL-12, a Th1 promoting cytokine in a murine model of EAE, Cua et al. surprisingly found that elimination of IL-12 exacerbated disease. IL-12 is composed of p35 and p40 subunits. IL-23, an IL-12 family member, also utilizes p40, but is completed by the p19 subunit. Realizing this, Cua demonstrated the elimination of IL-23 specific p19, but not p35 (IL-12), protected the mice from disease onset. Thus, a third T Helper class was discovered and dubbed Th17 Cells.

Whereas Th1s are involved with intracellular defense and Th2s are associated with antibody or humoral responses, Th17s have been found to be vital in extracellular pathogen defense. Th17s are intimately involved with the elimination of bacteria such as K. pneumoniae, B. fragilis, C. rodentium, E. coli, and some fungal species. Due to their prolific inflammatory ability, they have been implicated in some autoimmune diseases like multiple sclerosis. However, there are some reports that Th17s can maintain a protective effect, particularly in the gut. 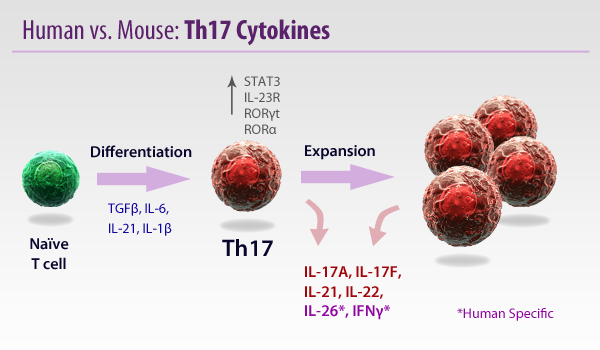 In mice, TGFÎ² and IL-6 have been the standard for Th17 cell differentiation. Recently, variations for Th17 development have been found by using assorted combinations of Th17-related cytokines, including IL-21 and IL-1Î². In humans, the role of TGFÎ² is slightly more controversial, as multiple reports have pleaded both the case for and against its role in Th17 differentiation. IL-17, one of the major products of Th17 cells, induces inflammation by recruiting and activating neutrophils and granulocytes through CXCL8 induction.

Murine naÃ¯ve T cells do not express IL-23R or RORÎ³t. IL-6, like many Th17 cytokines, signals through STAT3, which leads to production of IL-21. IL-21 works in a positive feedback fashion to promote a Th17 bias. Upon activation, Th17 cells can express IL-23R. IL-23 is required for the expansion and maintenance of Th17 populations. It should be noted that human, naÃ¯ve CD161+, CD4+ Th17 precursor cells express IL-23R and RORÎ³t even without activation.

Th17 cells do not exhibit the exact same phenotype between mice and humans. In particular, hTh17 express CD161, the equivalent of murine NK1.1, a marker typically found on Natural Killer, and NKT Cells. It was confirmed these cells are not NK cells, as they are restricted by MHC II and not CD1. Murine Th17 (mTh17) cells, however, do not express this marker. In addition, hTh17 express RORÎ³t and IL-23R constitutively, while these markers must be induced from mTh17s. CD194 and CD196 are also found only on hTh17 cells.

The origin of Th17 cells differs in humans. hTh17 are obtained exclusively from umbilical cord blood (UCB) and newborn thymii. Only hTh17 cells expressing CD161 could be induced (IL-1Î² & IL-23) to make IL-17 mRNA. NaÃ¯ve CD4+ T cells isolated from adult blood could not be converted into Th17 cells. 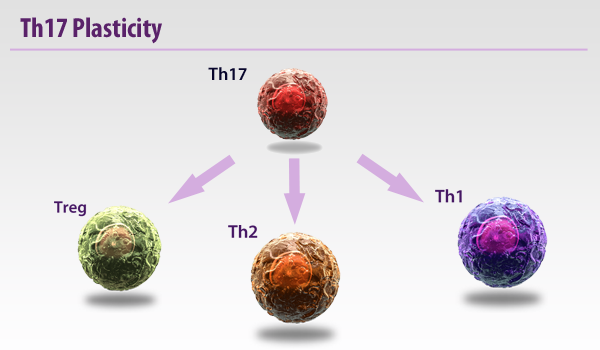 Similar to the antagonistic relationship between Th1 and Th2 types, Th17 cells can be inhibited by cytokines of other T Helper classes. IFNÎ³ (Th1) and IL-4 (Th2) have both been shown to block development of Th17 cells. Interestingly, low doses of TGFÎ² induce Th17s, while high levels block their development and favor Treg induction, even if IL-6 is present. The relationship between Tregs and Th17s is often inverse, as FOXP3 (Treg transcription factor) will inhibit RORÎ³t, and IL-2 will prevent activation of the IL-17 promoter.

While the establishment of Th17 cells has revealed a great deal of information , it should be noted that Th17 cells typically display a high level of plasticity, both in mice and humans. Th17 cells have been shown to convert into Th1 cells both in vitro and in vivo. This trend is particularly evident in lymphopenic mouse models, as highly purified Th17 cells produced IFNÎ³ following transfer into these mice. There has been evidence of Th17 conversion into Th2 types as well. It seems this is a one-way street, however, as there is little evidence of Th1 or Th2 conversion into Th17 cells. Recently, FOXP3+ RORÎ³t+ cells have been found and exhibit regulatory functions.

Explore the biology of Th17 cells and find products, as well as related resources, in our interactive pathway. Click on the image to open the pathway. 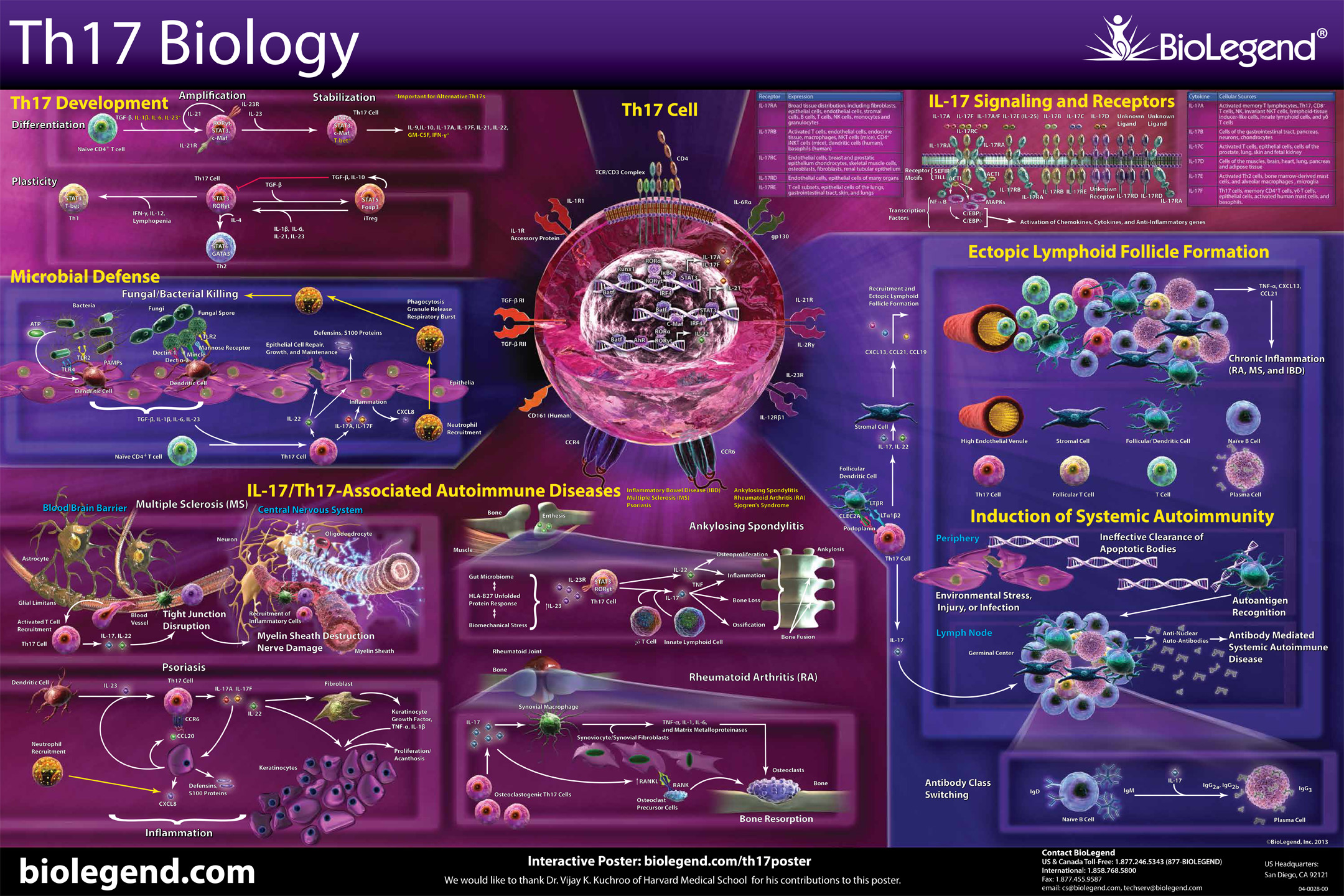