Apoptosis is a type of programmed cell death used by cells for self elimination. Apoptotic cells do not release their cellular contents and are quickly engulfed by phagocytic cells, and therefore avoid triggering unnecessary inflammatory responses. Plasma membrane blebbing, the destruction of the nucleus and its contents (called karyorrhexis), and budding of the cell into small apoptotic bodies are all morphological characteristics of a cell undergoing apoptosis. This process is regulated by proteases called caspases, as well as signaling proteins from the Bcl-2 family. Since many physiological functions rely on the proper elimination of cells, dysregulation of apoptosis can contribute to diseases like cancer and neurodegeneration. Study the mechanisms of apoptosis and identify apoptotic cells with our toolset of anti-caspase antibodies, recombinant death receptors and ligands, and specialized probes like Apotrackerâ ¢.

The extrinsic pathway is regulated by signaling through receptors of the Tumor Necrosis Factor receptor (TNFR) superfamily. These receptors include TNFR, Fas, and TNF-related apoptosis inducing ligand (TRAIL) receptors. Binding of a ligand to its respective receptor activates adaptor proteins that contain death domains, such as FADD and TRADD. Adaptor proteins recruit and facilitate the dimerization of initiator caspases like caspase 8 and 10, which are assembled at the death inducing signaling complex (DISC). This pathway can be negatively regulated by decoy TRAIL receptors (TRAIL R3 and R4) which compete for TRAIL binding. 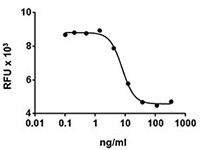 The intrinsic pathway is triggered by detection of cellular stresses, such as DNA damage and hypoxia, or by the absence of signaling from growth factors, hormones, and cytokines. This results in the increased permeability of the mitochondrial membrane, which is regulated by pro- and anti-apoptotic members of the Bcl-2 family (e.g. Bax, Bak, Bad). Cytochrome c is then released from mitochondria to activate adapter protein apoptotic protease-activating factor-1 (APAF1), which forms the apoptosome with dimerized initiator caspase 9. Extrinsic pathway signaling can also cross-activate mitochondrial release of cytochrome c through caspase 8-mediated cleavage of Bid, a pro-apoptotic member of the Bcl-2 family. 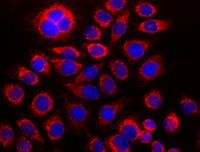 Cytotoxic CD8+ T lymphocytes (CTLs) and natural killer (NK) cells can kill target cells (e.g. cancer cells, infected cells) through FasL/Fas binding, and through secretion of granules containing proteases granzyme A and B. These granules penetrate the target cell membrane through pores formed by perforin. FasL/Fas interaction can trigger extrinsic apoptosis, and is the primary killing mechanism used by NKT cells, a subset of T cells that recognize CD1d. Granzyme B can directly cleave and activate initiator and executioner caspases. Granzyme B can also cleave Bid to induce cytochrome c release and the intrinsic apoptotic pathway. In contrast, granzyme A induces cell death through mechanisms independent of caspases. 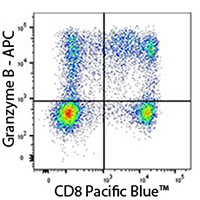 The role of caspases in AD-associated neurotoxicity (left), and dysregulation of apoptosis in cancer cells (right).

Tumor cells avoid apoptosis by disrupting upstream signaling of caspase pathways. This includes upregulation of anti-apoptotic proteins like Bcl-2, which was originally discovered as an oncogene, and downregulation of pro-apoptotic proteins like Bax. Expression of these apoptotic regulators are controlled by p53, a major tumor suppressor. Tumor cells can also have reduced caspase expression or have loss-of-function caspase mutations. Other methods of apoptosis evasion include decreased expression of Fas and increased expression of decoy Fas receptors that help cancer cells avoid CTL and NK cell-mediated killing.

Decreased apoptosis function can lead to autoimmune disorders. Mutations that lower the function of Fas, FasL, or caspase 10 causes autoimmune lymphoproliferative syndrome (ALPS), which results from the lack of autoreactive T cell death during selection in the thymus. Since caspase 1 activity produces activated IL-1Î², caspase 1 has been implicated in a number of inflammatory diseases. Increased IL-1Î² levels has been associated with type 2 diabetes, gout, and certain types of arthritis.

Detected in the FITC channel, Apotrackerâ ¢ Green (Apo-15) is a fluorogenic probe that binds to apoptotic cells in a Ca2+ independent manner. It exhibits a linear relationship with Annexin V staining, suggesting they are both detecting externalized phosphatidylserine (PS) residues, a hallmark of apoptosis.

Looking for more ways to study cell death and survival? Explore our library of antibodies for detecting tumor suppressors like PTEN, or transcription factors like NF-ÎºB. 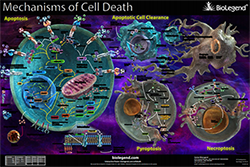 Interested in reviewing the details of apoptosis and other cell death pathways? Download or request a physical copy of our Mechanisms of Cell Death Poster to explore proteins and factors involved in processes like apoptotic cell clearance, pyroptosis, and necrosis.