Monocytes and macrophages can exhibit non-specific binding of antibodies and fluorophores used in cell surface staining of live cells. BioLegend has now formulated an effective blocking reagent, True-Stain Monocyte Blocker™. It is a non-antibody based blocking solution that has been shown to reduce non-specific monocyte binding due to the fluorophore and does not affect the desirable specific staining of monocytes. Now you can immuno-label monocytes with confidence, fully trusting your true staining results.

Download the PDF for our scientific poster on True-Stain Monocyte Blocker™.

There are many fluorophore properties and assay factors that influence the existence or severity of the non-specific binding: 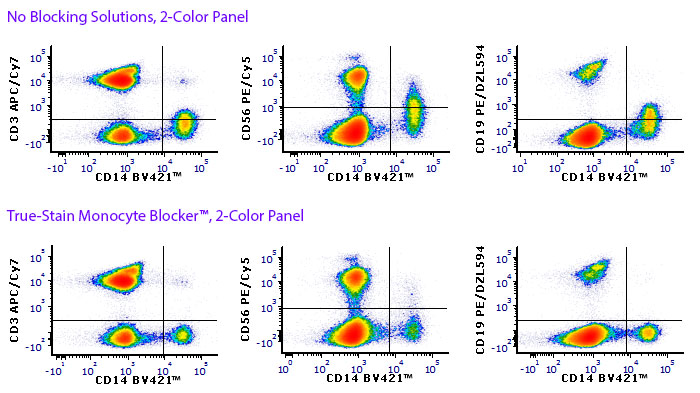 Human PBMCs were stained with 5 Âµl/test of antibody in 100 Âµl of cells at 1 x 106 cells/ml with (bottom row) or without (top row) True-Stain Monocyte Blockerâ ¢.

Blocking Fc Receptors does not prevent non-specific binding of monocytes 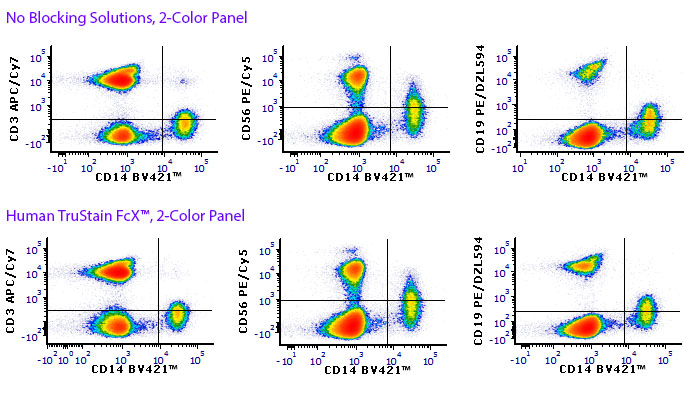 Human PBMCs were stained with 5 Âµl/test of antibody in 100 Âµl of cells at 1 x 106 cells/ml with (bottom row) or without (top row) Human TruStain FcXâ ¢ blocking solution. 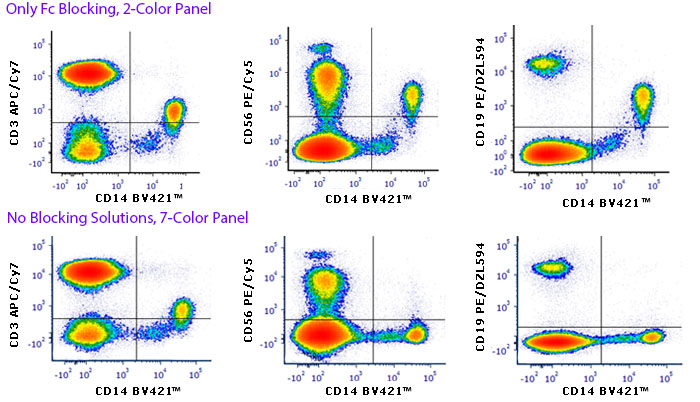 Human PBMCs were stained with 5 Âµl/test of antibody in 100 Âµl of cells at 1 x 106 cells/ml in a 2-color panel as indicated (top row) or in a 7-color panel (bottom row) as listed in the table below.

Mouse resident peritoneal cells were stained with MOPC-21 PE/Cy7 (panels A and B). Monocytes/macrophages show binding to PE/Cy7 as shown in plot A (identified by red arrows). This staining is eliminated when using blocking reagent as seen panel B.

In Fig. 2, human PBMC were split into two conditions, unstimulated (Fig. 2A-F) or a 6 hr stimulation with the Cell Activation Cocktail of PMA/Ionomycin with Brefeldin (Fig.2G-I). After stimulation, both conditions were stained with the antibodies listed in Table 2 with appropriate fixation and permeabilization for the detection of intracellular cytokines. Staining cell surface markers in the presence of the True-Stain Monocyte Blockerâ ¢ effectively blocked any non-specific binding due to cyanine-based fluorophore tandems.

Non-specific binding is only a staining artifact when tandem-labeled antibodies are applied to live cells. Our data indicates that short term exposure (30 minutes) of the True-Stain Monocyte Blockerâ ¢ itself does not have any stimulatory effect sufficient to induce cytokine production in PBMCs. The data below demonstrates the lack of IL-4, IFN-Î³, and TNFÎ± production under these conditions. In addition, no substantial effect on cell viability or cell activation could be detected in PMA/Ionomycin activated or unstimulated CD4+, CD8+ or CD14+ cell populations (data not shown).

However, longer incubation times or alternative stimulation conditions, such as TLR or other signaling pathways, would need to be further defined in order to fully assess potential unwanted stimulatory effects from the Blocker solution. 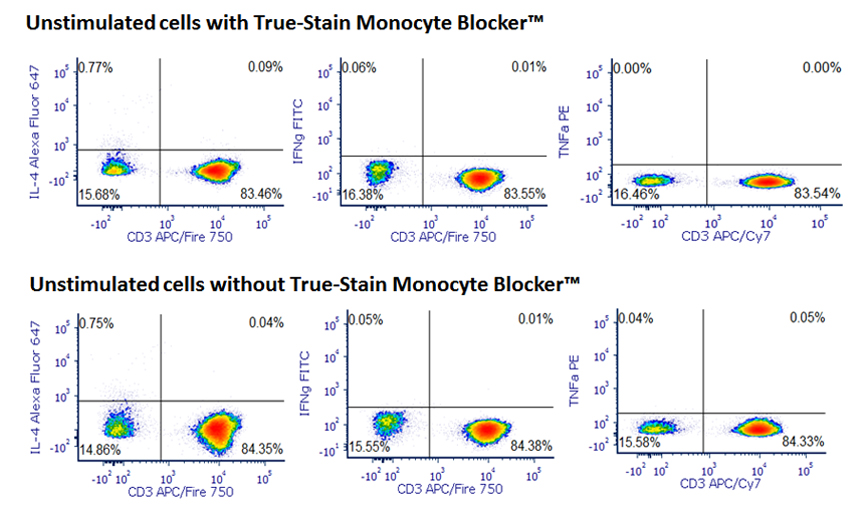