Stem cell biology has emerged as one of the most significant fields in contemporary science. Stem cells give rise to every other cell in the body and possess the ability to both self-renew and differentiate. In addition, scientists have been able to reprogram or induce the creation of pluripotent stem cells to further expand the possibilities in translational medicine. BioLegend offers stem cell-focused reagents for flow cytometry, cell screening, western blotting, ELISAs, cell differentiation, and more.

Two main characteristics define stem cells: the ability to divide multiple times without differentiating (Self-Renewal) and the capacity to differentiate into specialized cell types (Potency). These terms are discussed below. 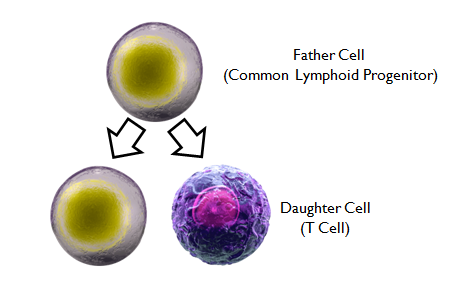 Obligatory Asymmetric Replication: the cell divides, maintaining the stem cell population with one copy and one differentiated daughter cell. 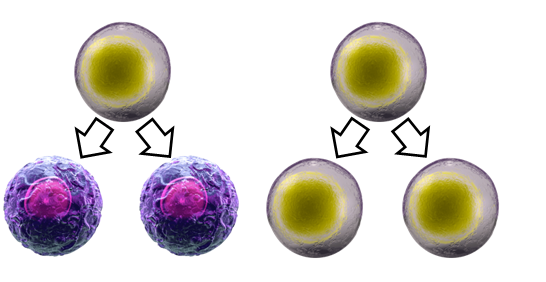 Totipotency: totipotent cells are obtained from a joined sperm and egg cell, it can differentiate into embryonic and extraembryonic cells. It has the capacity to create a completely viable organism. 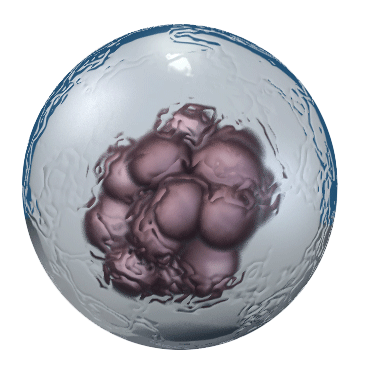 Pluripotency: pluripotent cells are derived from totipotent cellsand have the potential to differentiate into almost any cell (i.e., embryonic stem cells from blastocyst). 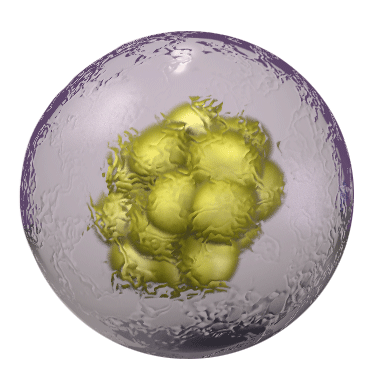 Multipotency: cells that can give rise to multiple cell types. These cells are typically closely related For example, Hematopoietic Stem Cell can change into several types of blood cells, but not brain cells. 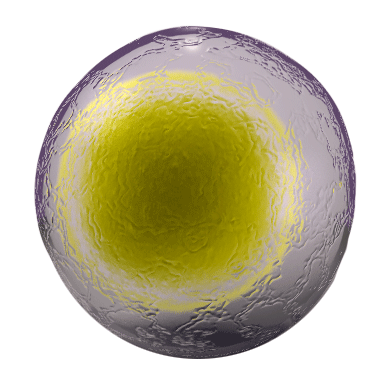 Oligopotency: the cell can only differentiate into a few cell types (i.e., myeloid or lymphoid progenitor cells).

Unipotency:  it can only make one cell type: itself. It also has the power to self-renew (i.e., hepatocytes).

Typically derived from in vitro fertilized eggs destined for medical waste, ESCs are obtained from the inner cell mass(ICM) of the blastocyst. These cells are isolated before a portion of the ICM differentiates (post fertilization: 3.5 days in mice, 5 days in humans). With the proper signals, the cells can proliferate indefinitely without differentiating, even in vitro. These pluripotent cells can differentiate into ectoderm, mesoderm, or endoderm. Because of the ethical ramifications of their derivation, there is some controversy over the use of ESCs. However, they represent the most flexible and potent cells compared to stem cells obtained by other means. Given their unlimited potential, ESCs are a favorite among scientists in clinical and research settings. 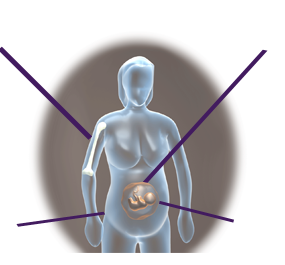 Bone Marrow: one of the first and most well-known stem cell niches, bone marrow houses the majority of hematopoietic stem cells. Isolation of cells from this area is generally very invasive and requires anesthesia.
Peripheral Blood: in recent years, hematopoietic stem cells (HSCs) have increasingly been isolated in the blood. They can be mobilized from the bone marrow by cytokine treatment. Typically, HSCs are selected for CD34. This type of isolation is far less intrusive than bone marrow isolation.
Umbilical Cord Blood (UCB): typically discarded following birth, the umbilical cord was discovered to be rich in hematopoietic stem cells (HSCs). UCB provides lower amounts of HSCs and is usually reserved for treatment of children.
Amniotic Fluid: multipotent stem cells have been isolated from pregnant women. 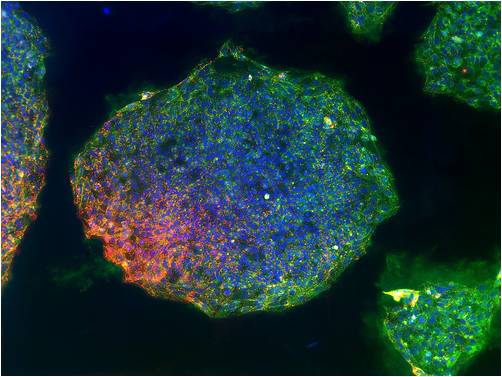 Induced Pluripotent Stem Cells (iPSCs) are adult cells forced back into an embryonic cell-like state. This is typically done through genetic reprogramming. Mouse iPSCs were first made in 2006, while human iPSCs were not discovered until late 2007. Both human and mouse iPSCs expressed stem cell markers and demonstrated pluripotent characteristics, producing cells for all three germ layers. iPSCs are used in several applications, including drug development, disease modeling, and transplantation medicine. Currently, viruses are used to transfect non-pluripotent cells. Transfected genes are involved with pluripotency and include Oct 3/4, SOX-2, c-Myc, and Klf4. Cells are then typically selected for the expression of Nanog, a transcription factor associated with self renewal. While the use of viruses in this method must be confirmed to be safe for humans, this process provides a form of âdevolution,â producing new uses for cells thought to be terminally differentiated. 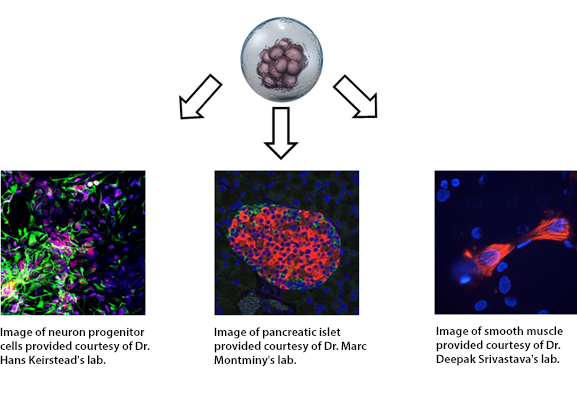 Given the natural ability of stem cells to generate almost any cell type in the human body, scientists have focused on the use of stem cells in therapeutic applications. Degenerative diseases like Parkinsonâs and Multiple Sclerosis are associated with defective neural cells and the loss of myelin . Following a heart attack or stroke, myocardial cells can be weakened or killed. Type 1 Diabetes, an autoimmune disease, targets insulin producing cells in the pancreas for destruction. Stem cells could have applications in all of these diseases, where they could be developed into replacement neural, heart, or beta cells. These treatments may even be able to avoid graft versus host disease problems, as the stem cells could be raised by the host, for the host. While these new fields of research must determine optimal methods for delivery and differentiation of the proper cell type, the results are encouraging and opening new avenues of thinking.