The Brilliant Violet™ family of fluorescent molecules are organic polymers with an extraordinary capacity to absorb energy (extinction coefficient) and a high efficiency with which to convert that absorbed energy to an emitted signal (quantum yield). When conjugated to antibodies, this results in high intensity brightness on labeled cells.

Traditional organic dyes are quite small, ranging between 300 - 1200 Da. Although multiple dyes can be conjugated to a single antibody, each acts independently from the others around them, thus their potency is limited to their own structural constraints and the potential for self quenching. In contrast, the Brilliant Violet™ polymers are comparable in size to AmCyan or APC, but unlike a protein, consist of repeating fluorescent subunits that act cooperatively along the entire length of the polymer backbone. Energy is conducted much like a molecular antennae to capture light and pass it down the antennae like a lightning rod. As the subunits work cooperatively, the polymers' extinction coefficient is substantially larger than that of standard organic dyes and this is reflected in superior brightness and signal-to-noise.

Structurally, Brilliant Violet™ polymers are unsaturated organic materials comprised of alternating single and double bonds and aromatic units. It is this repeating bond structure that creates a continuous π-orbital system and extended electronic delocalization. Such features give rise to unique and tunable optical properties, including large extinction coefficients (>106 M-1cm-1), intense photoluminescence, and massive collective response, all of which help to address fundamental limitations in detection sensitivity. Adaptation of polymer side chain chemistry to impart solubility in aqueous solution confers ability for use as a highly sensitive fluorescent conjugate in biological applications such as flow cytometry and microscopy.

Physical properties, such as high quantum yield in typical flow buffers, high solubility, and minimal non-specfic binding, are all built into the backbone structure and in the side chain modifications. Additionally, the polymer design specifically incorporates well defined functional sites for covalent attachment to antibodies.

Flourochromes derived from conducting polymers represent a new paradigm, High Sensitivity Fluorescence™, which aims to address fundamental shortcomings in reagents currently available for violet excitation in flow cytometry. Common dyes like Pacific Blue™, Alexa Fluor® 488 and Cy5 have high quantum yields but limited extinction coefficients. Alternative reporters like phycobiliproteins offer much greater absorbance cross-sections, producing brighter signals, but are limited by rapid photobleaching and sensitivity to fixation. Because the extinction coefficient of a conjugated polymer is directly proportional to the degree of polymerization (or number of repeat units), these structures are designed for improved brightness. Further, as these materials are derived from common synthetic organic and polymer chemistry techniques it is possible to manufacture reagents which are more defined and reproducible, in terms of size, conjugation sites, physical properties, and optical properties.
Unlike quantum dots, conjugated polymers have discrete excitation spectra, similar to that of organic dyes, which minimizes potential issues with cross-beam compensation. 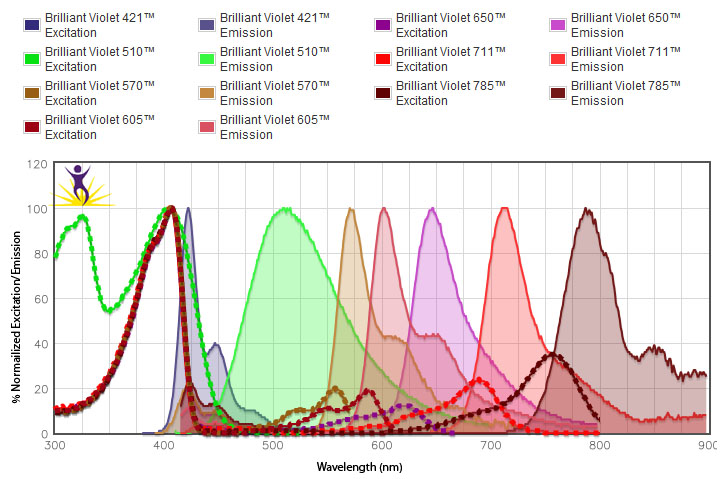