Role of Exosomes in Pathogenesis and Treatment of Parkinsonâs Disease

Currently, there is no cure and no early-diagnostic test for Parkinson’s disease (PD), the second most prevalent neurodegenerative disorder, after Alzheimer’s disease (AD). Without a reliable test for early onset, individuals can progressively develop symptoms over years until finally being diagnosed with PD. Curative treatments for PD are also lacking with current treatments focusing on alleviating symptoms but, as of date, do not stop disease from progressing or reverse existing motor dysfunctions [1]. April is Parkinson’s Disease Awareness month and we wanted to showcase just some of last year’s encouraging research. While past research has clearly shown a key role for exosomes in PD pathogenesis, current research highlighted here indicates an exciting potential for using exosomes as diagnostic and therapeutic tools in the fight against PD.

On a cellular level, PD is clinically associated with the loss of dopamine-producing neurons in the substantia nigra, the region of the brain that controls balance and movement. This neuronal pathology leads to the common motor dysfunction symptomology of PD: bradykinesis (slowness of movement), rigidity, postural instability, and resting tremor. PD is also clinically characterized by additional non-motor symptoms, including sleep disorders, sensory dysfunction, changes to mood and cognitive ability, and pain [2]. About 90-95% of PD cases are sporadic with unknown origin and patients are generally inflicted later in life, with the onset of disease occurring over the age of 60. About 5-10% of PD cases represent individuals with genetically-linked familial form of the disease that can present before the age of 50. A great deal of research over the last two decades have identified monogenic causes of early-onset familial PD, such as mutations in LRRK2, PRKN, PINK1, and PARK7. 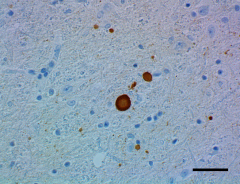 We also know from a number of cellular-based studies, including ones funded by The Michael J. Fox Foundation [3], that damage to neurons occurs as a result of aggregates of the protein alpha-synuclein (α-synuclein or α-syn) that then leads to cytoplasmic structures called Lewy Bodies (LBs). Alpha-synuclein is found in small amounts in various tissues but is most abundant in the brain where it occurs in multiple forms including soluble unfolded monomeric and polymeric forms and also as β-sheet-containing fibrils. The unfolded monomeric form occurs predominantly in presynaptic terminals of brain neurons where it is thought to help maintain supply of synaptic vesicles. An additional important role for the native form of α-syn may be to regulate release of dopamine, a neurotransmitter critical for regulating voluntary and involuntary movements (See our earlier blog on PD). Alterations of the SNCA gene, that encodes the α-syn protein, cause the protein to take on an incorrect shape (misfold).

Alternatively, inappropriate duplication or triplication of the SNCA gene leads to extra copies of the SNCA gene, which in turn leads to an excess of α-syn protein. While mechanisms are still being worked out, it is now believed that misfolded or excess α-syn protein aggregates to form LBs, ultimately leading to neuronal impairment. Lewy Bodies are thought to disrupt the regulation of dopamine, leading to toxic levels of dopamine and eventually to neuronal damage [4]. Lewy Bodies are also suspected to disrupt cellular machinery, such as autophagy, that play a vital role in removing unneeded protein [2]. As a result, excess α-syn protein clog and eventually impair neurons. The impairment or death of dopamine-producing neurons in the substantia nigra, the part of the brain that controls balance and movement, leads to the characteristic motor dysfunction symptomology of PD.

The progression of PD pathology is now believed to be the result of cell-to-cell transfer of misfolded α-syn protein, with the olfactory bulb and gut serving as initial sites. From these starting sites, α-syn protein movement between neurons is now believed to underly pathological PD propagation. Multiple mechanisms of cell-to-cell transmission have been researched, including exocytosis, endocytosis, extracellular vesicles (EV) and tunneling nanotubules. Of these, EVs such as exosomes are prime candidates as they can transport genetic material and protein to neighboring cells and cells more distal from point of origin [5].

Exosomes were first characterized in 1983 but research on exosomes accelerated after 2007 research revealed that cells utilize exosomes to transport RNA molecules between cells. Since then, the role of exosomes in physiological and pathological processes have only grown [5]. In regards to PD pathology, we know now that exosomes play two major roles. First, is their role in transporting α-syn protein to normal neuronal cells, where the protein has been shown to form aggregates, eventually leading to death of the recipient neuron [4]. Second, is their ability to transport RNA molecules, such as mRNA and microRNAs (miRNA). Given that exosomes can transport RNA and proteins that potentially influence gene expression and protein activity in recipient cells, it is now regarded that exosomes contribute to the spread of misfolded or toxic α-synuclein protein aggregates and are therefore implicated in PD pathology. In fact, exosome-associated α-syn protein are more likely to be taken up by recipient neurons and are more neurotoxic when compared to α-syn protein in oligomeric form [4].

Research implicating the aggregation of α-syn protein and subsequent cell-to-cell spread of the abnormal α-syn aggregates in PD pathology have focused primarily on neurons. Microglial cells are specialized macrophages found in the Central Nervous System (CNS) that support CNS health by removing damaged neurons and clearing infections. In regards to PD, we now know that microglial cells can be activated by α-syn protein and these cells then release pro-inflammatory cytokines. Neuroinflammation mediated by microglia is now considered part of PD pathology [4]. These researchers reported that microglia actively process and transmit α-syn protein to neurons using exosomes. More so, proinflammatory cytokines get released from activated microglia, leading to enhanced protein aggregation and transmission, all mediated by microglial exosomes [4].

Taken together, a number of studies have implicated exosomes in transmission of α-syn protein from multiple peripheral sites to the CNS. Within the CNS, exosomes from microglial cells also play a role in PD pathogenesis. However, this well-studied behavior of exosomes now highlights their potential to serve as vehicles for delivering diagnostic and therapeutic products. Currently, there is no accurate way to diagnose PD in early stages, at which point therapeutics would be most beneficial so as to slow or reduce degeneration of dopamine-producing neurons which precedes motor dysfunction symptoms. Therefore, identification of novel PD biomarkers would add a great deal to the development of early diagnostic tests. The α-syn protein in itself would not serve as a reliable biomarker, even though it is present in blood and cerebral spinal fluid (CSF), it is in low abundance in such samples. However, exosomes carrying α-syn protein are able to be detected extracellularly (in blood, plasma, saliva and CSF) and may serve as reliable biomarkers. Before that can happen, however, key limitations require closer study. Currently, the procedures for isolating and purifying exosomes require standardization and there is no consensus on a universal exosome marker [5].

In addition to the potential of using exosomes as biomarkers, their ability to transport protein and genetic material makes them a good candidate to serve as a vehicle for delivery of drug or genetic therapeutic products. Being a component of a cell’s native transport machinery, exosomes as therapeutic vectors would avoid activating cellular immunogenic responses. However, before its use as a therapeutic vector, further research into how exosomes from different cell sources behave and react to therapeutics is warranted as is our understanding of how exosomes are targeted between different cells [5].

BioLegend supports scientists striving to improve diagnosis and therapeutics for patients afflicted with Parkinson’s disease. Scientists can explore our products that target neuronal and other exosomes for such research. PD researchers also have a wide range of tools including antibodies, immunoassay solutions, and magnetic cell separation kits to identify and study microglia.