In honor of PD Awareness Month, we’re highlighting the resources our scientists have developed to advance research, including high-quality and specific reagents and immunoassays for the detection of key target proteins involved in the pathogenesis of PD.

To learn more about the known associated proteins that contribute to PD, and a comprehensive list of available reagents, visit our Parkinson’s disease page. 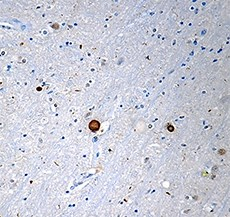 α-Synuclein is a 140 amino acid neuronal protein that belongs to the Synuclein family, which also includes β-Synuclein and γ-Synuclein. At the cellular level, α-Synuclein primarily localizes in the synaptic terminals of neurons. Although the normal function of α-Synuclein is not fully understood2, it was reported to have an important role in synaptic vesicle transport and membrane fusion3. Moreover, the aggregate form of α-Synuclein is one of the major components of inclusion bodies (Lewy bodies) inside nerve cells affected by Parkinson’s disease and Lewy body dementia.

The aggregated and fibrillar forms of α-Synuclein are known to be highly toxic, interfering with cellular functions that lead to neurodegeneration. Furthermore, the ring-like pores can damage membrane integrity and disturb intracellular calcium homeostasis, contributing to neuronal toxicity7. α-Synuclein peptides can also be found as components of amyloid plaques in AD, as well as in glial cytoplasmic inclusions in Multiple System Atrophy6.

Levels of α-Synuclein in cerebrospinal fluid (CSF) or plasma are currently being investigated as a potentially useful biomarker for disease diagnosis or prognosis5. Identifying and precisely measuring biomarkers associated with diseases is crucial for neurodegeneration research.

The LEGEND MAX™ Human α-Synuclein Aggregate ELISA Kit is a Sandwich ELISA with a 96-well strip plate that is pre-coated with anti-human α-Synuclein aggregate antibody. This kit is specifically designed for the accurate quantitation of aggregated human α-Synuclein in cerebrospinal fluid and tissue lysate.

The LEGEND MAX™ Human α-Synuclein (Colorimetric) ELISA Kit is a Sandwich ELISA that is specifically designed for the accurate quantitation of human α-Synuclein from various samples, including cerebrospinal fluid, serum, plasma, and cell culture supernatant. This new kit offers ready-to-use reagents with a longer shelf-life and higher sensitivity to low levels of α-Synuclein (as low as 1.8 pg/mL). Learn more about the benefits and features of the kit in our promotion. 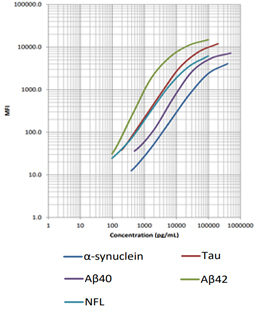 Our LEGENDplex™ Human Neurodegenerative Disease Biomarker Panel is designed to measure five neurodegenerative biomarkers simultaneously (α-Synuclein, Tau, Aβ40, Aβ42, and Neurofilament-L). This panel is a multiplex bead-based immunoassay that utilizes fluorescence-encoded beads suitable for use on various flow cytometers. It provides higher detection sensitivity with broader dynamic ranges than the traditional ELISA method. It has also been analytically validated and can be used to detect native proteins in human biological samples including serum and CSF.

Our α-Synuclein antibody sampler kits offer flexibility for sampling and detection of key targets in neurodegeneration. Our sampler kits are ideal for visualization of native and post-translationally modified forms of these proteins, and provide specificity for detection of full-length, truncated and phosphorylated species of α-Synuclein.

In addition to α-Synuclein pathology, researchers have identified more than 25 PARK7 gene mutations that can cause PD. These mutations are associated with the early-onset form of the disorder, which begins before age 50. PARK7 acts as a protease, an oxidative stress sensor, and as a redox-sensitive chaperone in protein folding4.

Make a difference in your neuroscience research by trusting the high-quality and validated reagents created by our scientists.  BioLegend is committed to empowering Parkinson’s disease research by providing you resources for key targets, such as α-Synuclein, and continuing to develop research tools for all aspects of your neurodegeneration research.