IL-21 was identified by a functional screening from conditioned medium of activated T cells using Baf3-IL-21R transfectans. In normal B cells, IL-21 can mediate cell proliferation, growth arrest, and terminal differentiation, or apoptosis, depending on their activation status. IL-21 enhances B cell proliferation following incubation with an activating CD40 antibody. This result suggests that IL-21 enhances B cell function following T:B cell interactions. Nevertheless, IL-21 inhibits the proliferation of murine and human B cells stimulated with anti-IgM antibodies. In addition, IL-21 enhaces proliferation, cytotoxic activity, and IFNÎ³ production by CD8-effector T cells, and induces terminal differentiation of activated natural killer (NK) cells. Also, IL-21 can drive Th17 responses in conjunction with TGFÎ². Nevertheless, IL-21 is not essential for the differentiation of Th17 cells in vitro and in vivo, as it was showed using IL-21 and IL-21R-deficient mice. IL-6 induces the production of IL-21 from CD4 T cells upon TCR stimulation, and IL-6 and IL-21 are key players in the Tfh differentiation, characterized by increased protein expression of both Bcl6 and CXCR5. IL-21R complex is formed with the IL-21R-alpha chain and the common subunits (Î³c) shared with other interleukins such as IL-2, IL-4, IL-7, IL-9, and IL-15. IL-21R is wildly expressed on T cells, B cells, NK cells, and dendritic cells in all lymphoid tissues, as well as some nonimmune cells, such as fibroblasts and epithelial cells.

Source
Mouse IL-21, amino acids Pro25-Ser146 (Accession# NP_068554) was expressed in E. coli.
Molecular Mass
The 122 amino acid recombinant protein has a predicted molecular mass of approximately 14.2 kD. The DTT-reduced and non-reduced proteins migrate at approximately 20 kD by SDS-PAGE. The N-terminal amino acid is Pro.
Purity
>98%, as determined by Coomassie stained SDS-PAGE.
Formulation
0.22 Âµm filtered protein solution is in PBS.
Endotoxin Level
Less than 0.01 ng per Âµg cytokine as determined by the LAL method.
Concentration
10 and 25 Âµg sizes are bottled at 100 Âµg/mL. 100 Âµg size and larger sizes are lot-specific and bottled at the concentration indicated on the vial (please contact technical support for concentration, or use our Lookup tool if you have a lot number.) Please note, new lots of the 100 Âµg size will be lot-specific and may differ from previous lots that had a fixed concentration.
Storage & Handling
Unopened vial can be stored between 2°C and 8°C for up to 2 weeks, at -20°C for up to six months, or at -70°C or colder until the expiration date. For maximum results, quick spin vial prior to opening. The protein can be aliquoted and stored at -20°C or colder. Stock solutions can also be prepared at 50 - 100 µg/mL in appropriate sterile buffer, carrier protein such as 0.2 - 1% BSA or HSA can be added when preparing the stock solution. Aliquots can be stored between 2°C and 8°C for up to one week and stored at -20°C or colder for up to 3 months. Avoid repeated freeze/thaw cycles.
Activity
Bioactivity was measured by its property to stimulate the proliferation of CTLL-2 cells in a dose dependent manner. ED50 = 15 - 60 ng/ml, corresponding to a specific activity of 1.7 - 6.7 x 104 units/mg.
Application

Gene ID
60505 View all products for this Gene ID
UniProt
View information about IL-21 on UniProt.org 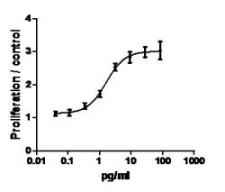 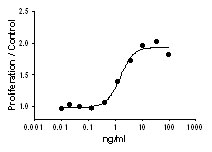 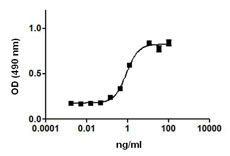