Are most appropriate when you have samples that are stimulated or exogenously treated.

Background signal can change when you stimulate samples, potentially affecting population resolution. For example, PMA stimulation can cause a decrease in surface CD4 expression in T cells while also increasing the level of autofluorescence in short wavelength emission channels with the production of autofluorescent molecules. Alternative gating strategies may have to be used (i.e., CD3+, CD8-, CD56- events) or the intracellular detection of CD4. 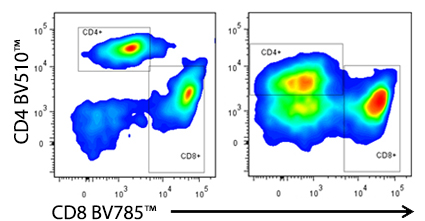 Human PBMCs were either untreated (left) or stimulated with
PMA/Ionomycin for six hours (right). Samples were analyzed two days later.

In other cases, it helps to compare stimulated samples to the basal level of expression in unstimulated controls. Unstimulated controls help to establish where gates should be drawn and also let you better analyze the amount of meaningful upregulation of your target. 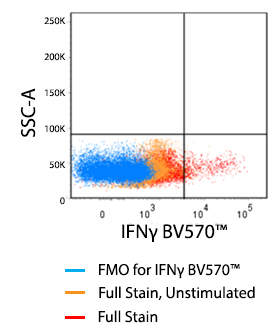